One of my best friends, Jenny, sent me this recipe and she’s one fine cook, so when she sends something my way I know it’s going to be good. Jen and I went to high school together and then were roommates at WWU (along with two other girls who soon became life long bffs). Jen and I were happily trudging through the path of life together until one day she fell in love and transferred to UW. Then to add insult to injury she married the man, he graduated from the UW school of medicine and they picked up their darling son and two dogs and moved all the way across the country to Albany, NY. Rude! But that’s okay, her husband is a great guy and he’s doing great things and I know it won’t be long before they move back to Seattle (right, Jen?).

The best part about Jen living in NY (besides getting to visit her) is that she’s become an avid blogger and I’m almost more in the loop with her family and cooking adventures than I was when she lived in Seattle. When Jen moves back, one of her goals is to write a cookbook with her mom. I’m waiting with baited breath – I know it’s going to be fabulous.

So on to the delicious sandwich. Jen adapted this Tyler Florence recipe and I took it one step further and really simplified it so it could be a week night dinner. And let me tell you, it’s one mouth watering sandwich!

Click here for the original recipe. I skipped poaching the chicken (which is 2/3 of the recipe) and picked up a Costco Rotisserie Chicken… although in hind sight if I wanted to attempt to make this a bit healthier I should have tried the Kirkland Signature pre-cooked chicken strips. They’re an item Curtis helped develop and have an extremely clean ingredient deck… but no, I went with the juicy, salty (inexpensive) goodness of a rotisserie chicken.

I also picked up Delice de Bourgogne (it’s a triple cream brie) at Costco. Being married to a cheese buyer I know is going to take a few years off my life, because this stuff is crack. Once you go Delice, you’ll never go back to plain ‘ol brie.

When Jen originally sent this to me my first thought was to make it as an appetizer on bruschetta, but it’s a bit messy and there are a lot of ingredients so it worked well as a regular sandwich. 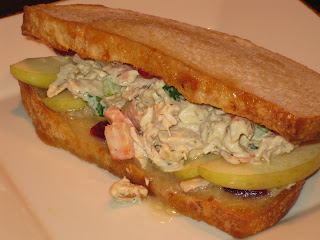 For the Chicken Salad:

Roughly chop the walnuts and toast in a dry skillet until they are brown and slightly fragrant. Season walnuts with salt once they are finished toasting. Add the walnuts, mayo, mustard, lemon juice, celery, onion, carrot, parsley, dill, olive oil and salt and pepper to taste in a large mixing bowl and combine. Fold in the shredded chicken and set aside while you prepare the bread.

Toast the bread in a hot oven until golden (next time I’ll throw it in the Panini press for pretty grill marks). Smear each piece with a little butter and then a tablespoon of cranberry sauce. Lay the cranberry-smeared pieces out on a sheet tray and top each piece with 2 to 3 slices of thick-cut brie. Pop this back in the oven for a minute or 2 so the cheese is slightly melted and creamy. Remove from the oven and top with a few slices of green apple. Top with a scoop of the chicken salad and cover with the other half of the bread to complete the sandwich. Serve.
Posted by Emily Adamson at 4:49 PM 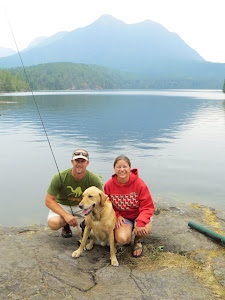